“It’s a year since I was elected as Labour District Councillor for Newington. Since then I have stuck to my election pledges of being hard working, being available to residents in my ward and being transparent in all that I do as an elected representative.

I was the only candidate to stand for election that wasn’t pro Manston Airport. I wanted then to move to mixed use and to look at the possibility of using this fantastic opportunity as an engine of economic regeneration.

It seems that there is progress on Manston, as reported in the local press. However, it’s sad that this is taking so much time to move forward.

A year ago I said UKIP was unravelling, and I stand by that statement.  The Airport, which they promised they would open in days, is a promise I predicted they couldn’t keep. I understand very well those that have a genuine nostalgia for the airport and those that think passenger fights would be a good idea. But the facts are, what has been proposed and will continue to be proposed is a dirty great cargo hub. No good for people, jobs or the environment.

Likewise Ramsgate Port struggles on. Money is bring poured in to it, but there no prospects of any contracts to merit that investment. What folly! What a waste of cash.

Ditto Pleasurama, the abandoned development fronting the beautiful Ramsgate Main Sands. No real progress on this topic here either. I have asked the leader of Thanet’s UKIP-controlled district council, Chris Wells for better information, particularly on the issue of the sale of the freehold and the long stop clause   in the newly negotiated freehold contract. That’s the point at which we can force action if the eyesore isn’t completed. What a mess it is! I’m currently pressing UKIP councillors Trevor Shonk and Martyn Heale to furnish me with the exact details  of the hoardings -; I’d vastly prefer to see beach huts or pop up businesses on that site in the summer months. Of course I’m not sure when we will hit the long stop date -; I couldn’t get Chris Wells to disclose it. We could theoretically buy it back and return the Pleasurama site to Ramsgate locals. But we won’t have the money. 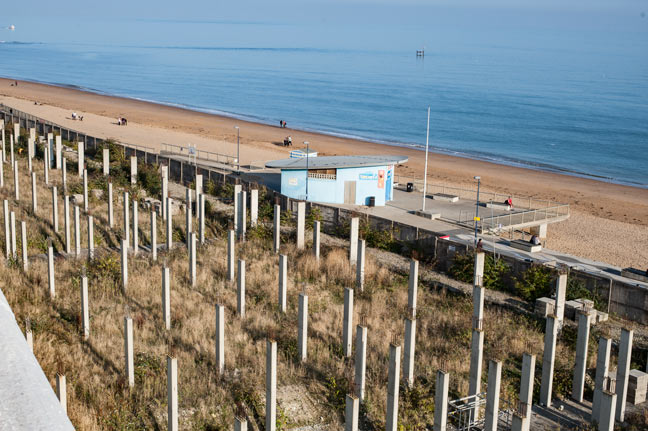 What an eyesore! The abandoned Pleasurama site on Ramsgate seafront.

Wouldn’t it have been marvellous if the Sprint revival could have gone ahead. Now that the Gefco contract has ended. It raised 350K which was spent in the locality in local businesses. I can’t imagine that the end of the contract would have been a surprise! It demonstrates a lack of forward planning.

In the course of the year, I’ve been really concerned about poverty, poverty pay, housing and homeless. Did you know South Thanet has the lowest wages in the wealthy South East?

On the other hand -; nothing dampens either my love of the area, especially our fantastic coast line and  my optimism for Thanet.

I have been true to my word, always available, I now run weekly surgeries at the Labour office in Newington Road. I compile a monthly report and I put these on my website.

I’m concerned that the new super council will go head without consultation with the public -; more on that soon!!

Last year I took a decision to stand for election to Kent County Council, where I can be more effective for you. The county goes to the polls on May 4th 2017 and all those eligible in Ramsgate will get to vote. We have already started our campaign and you may have had one of our leaflets drop through your door. If not, you can view an online copy here (PDF 444kb).

As ever, this will be a busy year, but one I’m looking forward to more than ever.