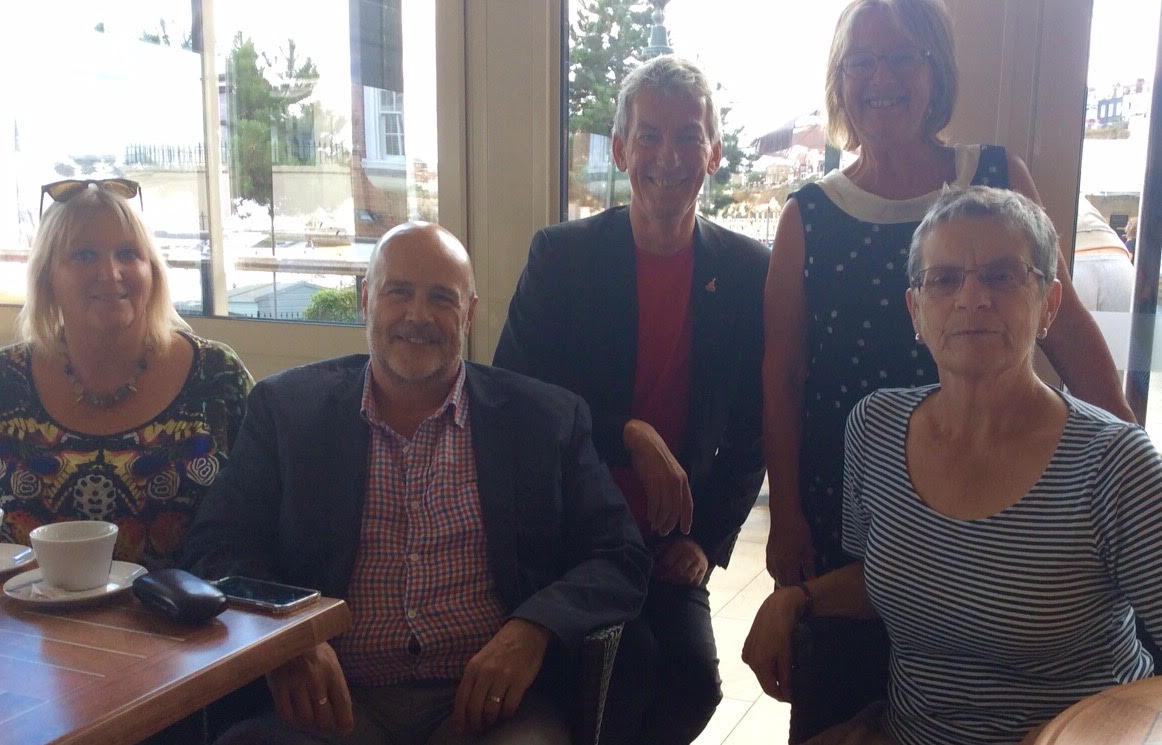 On Saturday 19th August four Thanet Labour Group councillors met with our newly appointed MEP John  Howarth who has ‘taken over’ from Annalise Dodds since her election to Parliament in June.  A range of key issues were discussed.

1.  Brexit. Its impact on our community. We’ve seen the sad demise of Kent company, Southern Salads. Put out of business by unfavourable exchange rates as sterling depreciates against the Euro.

2. Security. In the wake of atrocities across Europe and in the UK, how will Brexit impact the collection and sharing of ‘intelligence’ via Interpol etc.  There must be a demand to maintain the UK’s involvement for to our benefit and for the wider EU community.

3. Manston. John was briefed. Whichever side of the fence you’re on, the impact on Ramsgate and surroundings will be huge. Ramsgate Councillors are committed to ensuring that there is no possibility of a polluting air cargo hub or the potential for introduction of night flights.

4. Dover and Euro tunnel crossing and impact on our border. We can’t envisage how it can be seamless and the UK Government is seemingly not concerned with the impact on Kent ports. Can we can look forward to traffic jams and operation stack again?

5. The prospect of having a ‘hard border’ at Dover. This doesn’t seem to be fully considered.

6. The importance of fishing and agriculture to our local economy. Where will the workforce come from after we leave the EU?

7. Maintenance of Blue Flag beach status, so vital to environmental quality and to our tourism industry.

8. The Thanet English language schools. We emphasised the need to ensure that these businesses with their positive economic impact are maintained and that Brexit isn’t a threat. The value to the local economy is over £20 M per year.

9. Statistics show an increase of over 34% since 2013 in the numbers of victims of human trafficking and we discussed ways of tackling this example of modern slavery.

County Councillor Karen Constantine, will be tabling two questions at County Hall, in due course, one on Manston and the potential for a negative impact on Ramsgate and surrounding areas, and also the potential for different treatment between East and West Kent constituencies. The second question will focus on Dover, and the impact of a ‘hard border’ traffic chaos, and the potential of relocation of immigration control from France.

“I’ve been a union negotiator for 25 years, it strikes me that scant negotiations are taking place. There are simply so many questions and details to clarify, amend and agree that the timescale is utterly insufficient and the Government apparently lacks the impetus to resolve these myriad tasks.”

” the truth is many in Thanet are heavily dependent on income from the English Schools – we lose these at our economic peril. Many local people benefit from this industry”.