Help us win South Thanet for Labour! You can make a real difference. 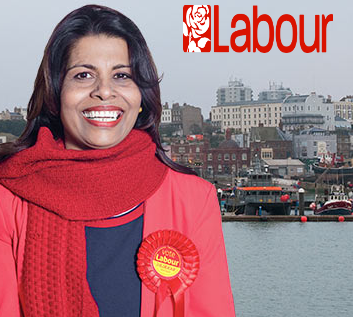 We are delighted that our Prospective Parliamentary Candidate (PPC) is Raushan Ara and our campaign to get her elected to represent the whole of South Thanet.

Well-known locally as a Labour Party activist, and for her work in the community, Raushan will unite the local party to fight for the common purpose and defeat UKIP and the Tories. To make this election winnable she needs all the support we can give.

We’ve been so delighted with members and supporters turning out to campaign in the Kent County Council elections.  Many people are understandably nervous about going out campaigning but we always make sure that anyone volunteering goes out with experienced canvassers.  You don’t need to do or say anything on your first time out but we do find that people grow in confidence very quickly.  Or you may want to help out in the office – there’s always plenty to do and you’re sure of a warm welcome.

We need to raise £10,000 urgently for the campaign.  This website has seen people donating every day since the election was called and small amounts quickly start to add up. Some may be able to give more, and some may be able to give less.  Whatever you can afford will help and make a difference to the outcome of this election.  The damage the Tories have already done will be nothing compared to what they will do with another 5 years in the bag!

The Labour Party relies on membership subscriptions which are almost entirely spent on running the party nationally. Very little comes to the local party which is why we are always fundraising and the constant series of local by-election campaigns has depleted our resources.  With only 37 days until the General Election we need to fundraise now!

The Tories already have a war chest provided by a small group of multimillionaires, but in Labour we’re proud to be building a new style of British election campaign funded by small donations from thousands of passionate supporters like you.

Any amount that you donate via this website (see the DONATE button) goes straight to Labour in South Thanet.