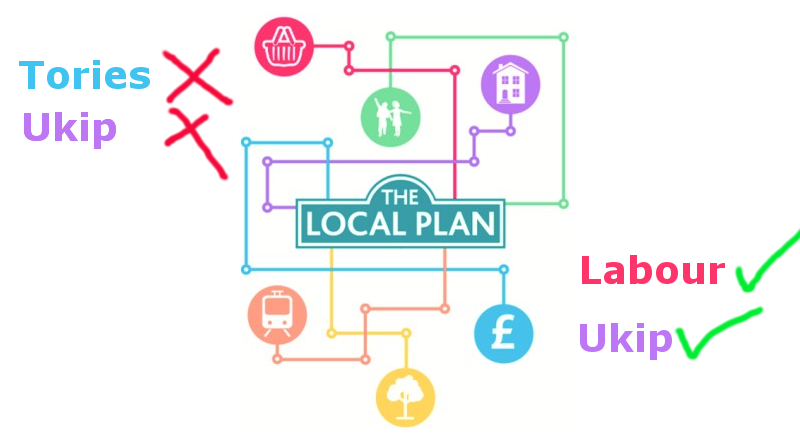 ON Thursday, 18th January, Thanet District Council’s draft Local Plan was voted down by Conservative councillors and some renegade UKIP councillors.  This was despite advice and warnings from the council’s CEO, Madelaine Homer, and officers.  Labour councillors, and some UKIP, voted to accept the plan and warned of the dire consequences of refusing to pass the plan.

Cllr Peter Campbell, for Labour, spoke at the meeting.

“Most residents in Thanet believe that we are tonight adopting or rejecting the draft Local Plan.  We are, of course, not doing that, indeed, we do no currently have authority to that.  Before we can do that the Planning Inspectorate, who in open session at a public enquiry examines the evidence base that supports our draft Local Plan and then either passes or rejects it.  At that public examination the inspector will consider representations from residents and organisations that have commented on the draft plan during the consultation period and THAT is what we are voting on – to allow residents and organisations the opportunity to comment either positively or negatively.  Only those that have commented during this period will be heard or considered by the inspector so if you intend to vote against the proposal tonight you are, in effect, denying your residents the opportunity to comment on their draft Local Plan.

If you are voting against because you disagree with the designation of the land at Manston as mixed development, then please consider this.  The only way that an airport will be reinstated on that site currently is via the Development Consent Order being progressed by Riveroak Strategic Partners (RSP).  If this is eventually successful, then it overrides the current designation and will revert to aviation use.  If you do vote against tonight you are risking the government minister for Communities, Housing and Local Government, currently Mr Sajid Javid, imposing the draft Local Plan with extra housing requirement which will scupper any chance you have of reopening Manston for aviation use.

In any case, I would wish to express my thanks and appreciation to Mr Adrian Verrall and his team for the enormous amount of hard and conscientious work they have put into creating this draft Local Plan.”

What is clear is that playing politics is clearly more important to some councillors than actually prioritising the needs of residents and the area.  We are now at risk of central government bureaucrats stepping into run our council business because we have failed to meet our requirements.  Sajiv Javid wrote to those councils who were late in producing a Local Plan and required them to do so asking for a letter to explain any failure to do so by 31st March and warning of the consequences of failure.

Prior to the vote Madelaine Homer CEO of Thanet district Council made it clear that legal advice from a Barrister had underpinned Officer’s advice and in her letter to all councillors she stated the following warning.

“I am aware that a number of Members are minded not to support the publication of the Local Plan and this would have a number of serious consequences for the council and the community it serves:

Failing to publish the plan would mean that there is no plan and therefore no-one will have the opportunity to make any comments on the plan. This includes public commentary on the airport i.e. those supporting or opposing the airport will be prevented from being given the opportunity to put their views and evidence before the Inspector and persuade him/her to accept their views.

The Ministry of Housing, Communities & Local Government (MHCLG) are highly likely to intervene if the council does not publish its Local Plan; this means we will lose control over our Local Plan process. The MHCLG have specifically requested that Officers make Members aware of the risks and consequences.

Failing to follow the advice of officers and the supporting legal advice also shows to the LGA and MHCLG that we are not demonstrating that we have learnt the lessons from the recent past and will impact on the credibility and reputation of the council.

The Council will continue to be exposed to ad hoc development as it will not have a 5 year housing supply which equally applies to and includes the Manston Airport site so technically you could receive an application for thousands of homes for that site which is potentially winnable on appeal. At least plan B gives you some control over that site rather than a free for all.

It is highly likely that the Council will have to accommodate the additional 3,000 + houses as we will not achieve submission of our local plan by the 31st March deadline.

A decision to reject the Local Plan without proper grounds runs the risk of Judicial Review on the basis of irrationality, bias or predetermination.

Given the above risks and the fact that there is an NSIP/DCO process being progressed giving the opportunity of an operational airport at Manston in the future it seems rational to consider an alternative proposal to the current recommendation.

Whilst the DCO (if accepted) would replace the Local Plan policies for Manston, there remains a continued wish amongst some Members to provide support to a future aviation use in the Local Plan. Legal advice has been obtained on how this might be achieved, and the advice is, it could be achieved by deferring the mixed-use designation pending the resolution of the DCO process.

The deferral would be for two years, the rationale for this is that the Inspector needs to balance the interest of all parties in respect of the site and the Inspector must be sure the provisions within the local plan do not prejudice delivery of housing as it relates to the required 5 year housing supply.