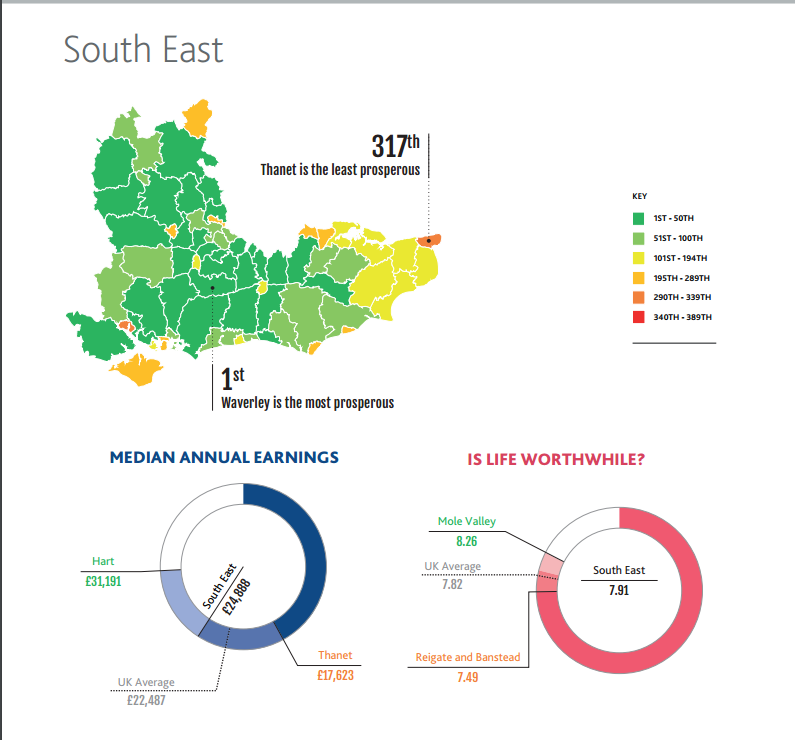 According to a new report – The UK Prosperity Index – Thanet is the least prosperous area in the south east.  This isn’t really anything new but it’s still shocking to see that in the most prosperous region of the country, Thanet is still struggling.  Poverty and deprivation disgracefully thrives in Thanet. This Tory government has recognised this by cutting the revenue support grant awarded to Thanet District Council by 40% over the last four years with yet another  cut of 15% this year, the largest cuts in the South East. These cuts have been supported by our very own Tory MPs. No surprise there then!

Overall, in terms of the rest of the country, Thanet’s position is 317th out of 389 areas.  Part of the reason that Thanet’s position isn’t lower is due to the natural environment we enjoy that helps us score well on this criterion and drags us up from much nearer the bottom.

The report is well worth a read and some of the recommendations about how to transform some of the most deprived areas in the country are entirely in keeping with Labour’s vision for the area.  The report points to the absence of aspiration and life chances that ‘keeps prosperity at bay’ in too many parts of the UK.  Certainly there’s a lot of work being done locally to raise expectations and aspirations, particularly in our young people but there remains much to be done.

The report also recommends that power, responsibility and the freedom to innovate ‘in delivering both economic and social development’ should be entrusted to individuals, communities, local organisations and councils.  Locally, we do have a growing and rich sector of this kind of involvement and this was in evidence at Ramsgate Town Council last night with a huge turnout of local people wanting to comment on proposals for an extension of the aggregate operations at Ramsgate port.  Residents with long and new experience of ‘fighting’ for Ramsgate, wanting their voices to be heard and acted upon, have real vision as to what Ramsgate can and should be.

The report also comments on how revenues from housing – whether it be rents, new homes bonuses, council tax etc – could be spent on support services that are under such severe strain. It talks of capital being raised against assets to fund more social housing.  Building more social housing locally was begun again under the last Labour administration and it remains something that Labour is committed to.  We desperately need more social housing for local people.  It also talks of revenue being used to expand the horizons of the young but, in the main, it points to decision-making being rooted in the wishes of the community.